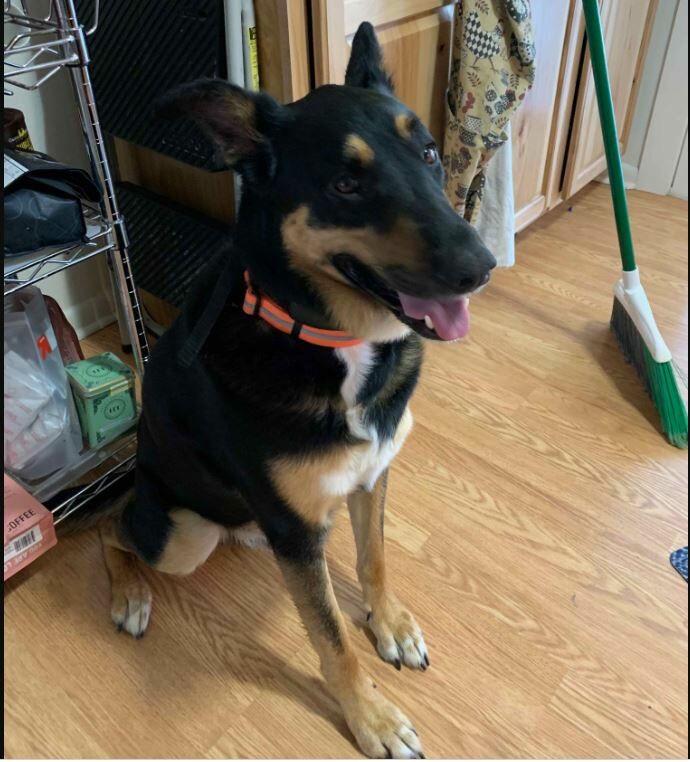 We adopted Justice at Christmas from Yellowstone Valley Animal Shelter. He was surrendered as his caregivers went into memory care. He was obviously trained and well cared for. He had a clean vet bill at Lockwood Vet clinic. He is approximately 80 lbs. He’s house broken and does well when left alone; hasn’t had any accidents inside. He likes to graze feed and he eats approx 2.5 cups of food per day. He likes to lay in the sun in the AM and likes to go to bed by 9pm. Every so often when he gets bursts of energy he likes to run and play. He does not do well with cats. He barks at cats, chases them, and is aggressive towards them; he obviously had never been around them. We have worked on integration, but it has not happened. He has been around 2 very old small dachshund dogs and done “ok” with them; but has shown food aggression towards one. He mostly seems to be “protecting” the humans he is around at all times. He chases chickens, barks at them, but hasn’t harmed them. He leash walks well, again attentive to whomever is walking him. He is shock collar trained. He responds well to commands seeing the controller and with sound beeps for behavior correction; we haven’t had to actually shock him. He is really a sweet dog. He would do best in a home where he is the only pet. He has been around our kids, and is slowly getting used to their noise and activity. He is safe with our kids, but I couldn’t recommend him to a house with kids because of his unpredictability and tendency to be fearful. He has a fearful nature; doesn’t like storms, fireworks, loud noises. He loves mostly to be sleeping near us and having adult attention. He didn’t like the crate for sleep, but will sleep on his bed. He loves to play and prance with balls and chew toys. Loves pig ears, rawhide treats and greenies. We would give his “things” away with him. He has a bed, food, some treats, toys, leash, and his shock collar. This dog is not perfect, but to the right owner/home he would be a great dog. We don’t want to have to re-home him, but after the latest food aggression towards the older dog and just not working out with our house/cats, we have to let him go.